Students can Download English Lesson 1 Ways of Learning Questions and Answers, Summary, Notes Pdf, Activity, KSEEB Solutions for Class 6 English helps you to revise the complete Karnataka State Board Syllabus and to clear all their doubts, score well in final exams.

C1. Answer the following questions in one or two sentences each:

Question 2.
What was the target set up by the Guru?
Answer:
The Guru had set up an artificial bird made of wood and grass on top of a branch of a tree.

Question 5.
Who passed this test?
Answer:
Only Arjuna passed the test.

Question 9.
Who drove the crocodile away? How?
Answer:
The brave and ever – ready Arjuna responded quickly. He set an arrow to his bow, shot it into the stream aiming at the right point. It infused the crocodile and drove it away but it did not hit the Guru’s foot.

Question 11.
What is important to succeed in life?
Answer:
Concentration and focus are the key to success.

C2. Discuss in small groups and answer the following:

Question 1.
How did Drona test the princes’ skill and ability in archery? Narrate any one incident.
Answer:
One day, Guru Dronacharya wanted to test his disciples, the Pandavas, and Kauravas. He asked them to assemble in the large open ground in front of Hastinapura palace. He asked them to get their bows and arrows and be ready to show of their skills when he called each of them. They all agreed enthusiastically.

The guru had set up an artificial bird made of wood and grass on the top of a branch of a tree. The boys were to shoot the bird on the tree.
Guru Drona asked the boys to observe the tree. He then asked on of the boys to tell him what he saw the boy told him that he saw the tree, its trunk, branches, the sky over it and the ground below it. He was sent back.

Then he called Yudhistira, the eldest of the Pandavas and asked him the same question. Yudhistira replied that he could see the tree, the bird, his brothers, friends, and everything. Guru Drona told him that he could not shoot the target and sent him back. Again he called the other boys in turns and asked them the same question. He was not satisfied with their answers.

Later he called Aijuna and asked him if he could see the bird on the top of the tree. Aijuna replied that he could only see the neck and head of the bird. The Guru was pleased, and he asked Arjuna to shoot an arrow at the bird. Aijuna aimed and hit the artificial bird’s neck and if felt to the ground.

Guru Dronacharya blessed, Arjuna and advised the other boys to concentrate and focus like Arjuna and that those qualities are the key
to success.

Question 2.
How did Aijuna prove his skill in archery?
Answer:
Once, while Guru Dronaeharya was washing his feet in a stream, a crocodile grabbed his foot. He pretended to panic and shouted for the boys to save him. All the other boys who were standing and the bank were awestruck and confused. But Aijuna bravely responded quickly. He shot an arrow at the crocodile’s mouth, skillfully avoiding his Guru’s leg and drove the crocodile away. Thus Arjuna proved his kill at archery.

C3. Say whether the following statements are True or False:

Ways of learning Summary in English 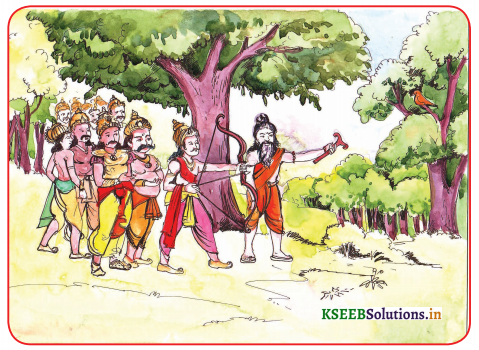 This is a small story based on an event from the Mahabharatha, the epic by sage Vedavyasa. Guru Dronacharya was the preceptor for the Kuru Princes. He educated both the Pandavas and Kourava’s in the field of archery. It was a part of military service that the princes of those days had to learn.

Then Dronacharya called Arjuna and asked whether he could see the tree, the bird on its and other things around Arjuna replied that he could see only the bird and nothing else. Then the Guru asked him if he could see the bird, Arjuna told him that he could only see the neck and the head of the bird. The Guru ordered Arjuna to shoot his arrow. When Arjuna shot at it, his arrow hit the bird’s neck and it fell down on the ground. All clapped and congratulated Arjuna except Duiyodhana. Dronacharya was happy. So he embraced Arjuna and told other disciples that concentration and focus are the keys to success and to be focussed always.

The disciples saw that but they were confused, except Arjuna who responded positively. He shot an arrow which infused the crocodile and drove it away. The arrow shot by Arjuna didn’t injure the Guru’s foot. Dronacharya praised the great courage, skill and strength of Arjuna. These traits of Aijuna are necessary to achieve goal and success. Reacting quickly and in a positive way it always expected of from the disciples.

Ways of learning Summary in Kannada 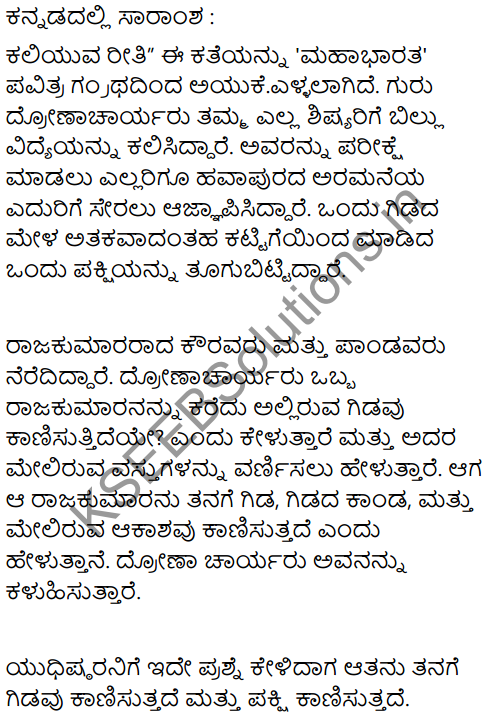 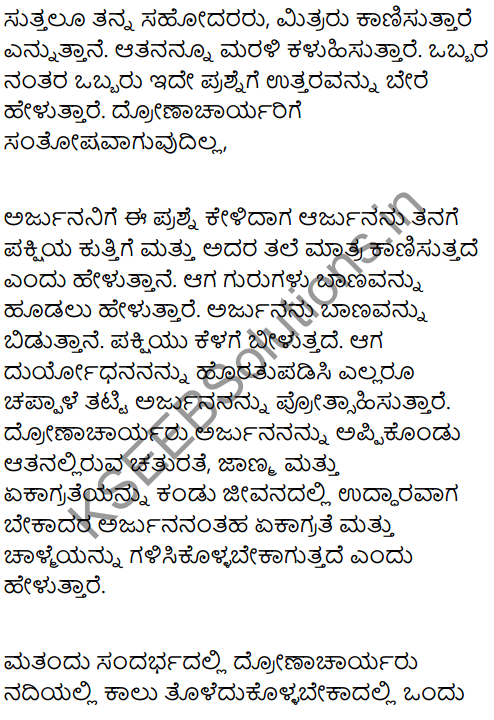 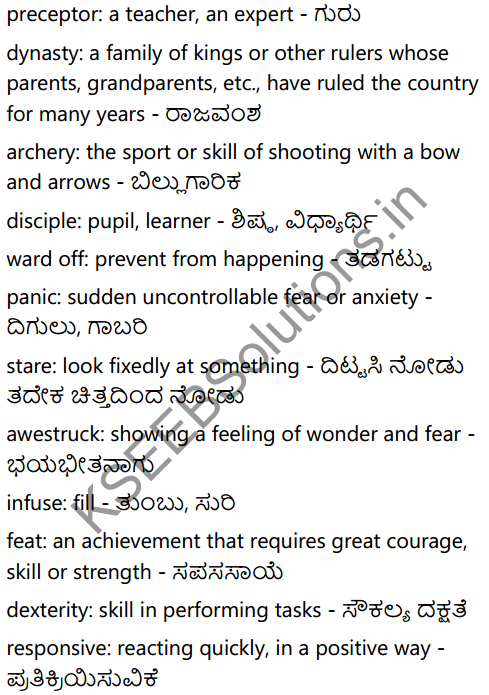