Students can Download English Lesson 7 Nest with Grand Parents Questions and Answers, Summary, Notes Pdf, Activity, KSEEB Solutions for Class 7 English helps you to revise the complete Karnataka State Board Syllabus and to clear all their doubts, score well in final exams.

Answer the following in a word, phrase or a sentence each:

Question 1.
Mention the activity Anjali involved in when she was not bratty.
Answer:
Anjali would talk much and pretend to be glued to her favourite programme on TV. She was not very polite and complained, though not directly.

Question 3.
Pick out two examples from the eighth paragraph to show that the grandparents objected to their habits.
Answer:
They would not go with them to eat out at restaurants. They thought pop music was noise and ice-creams were not good for health.

Question 4.
What did Anjali feel about the house?
Answer:
Anjali felt the house suddenly looked too small.

Question 5.
Describe the changes that are mentioned in the eleventh paragraph.
Answer:

Question 1.
My father’s father is my …………?
Answer:
Paternal grandfather

Question 2.
My mother’s father is my …………?
Answer:
Maternal grandfather

Question 3.
My mother’s mother is my …………?
Answer:
Maternal grandfather

Now, look up the dictionary and write the meanings of the following relationship/terms:

V2. Complete the following paragraph with the kinship terms given in the box below:

V4. With the help of the clues, complete the crossword puzzle:

1. a person who gets used to something
2. parent’s parents
3. very tired
4. parents and children
5. trouble somebody repeatedly

1. expression of feeling sorry
6. relating to God, heavenly
7. great anger
8. make place for something or someone
9. to go and live in another area 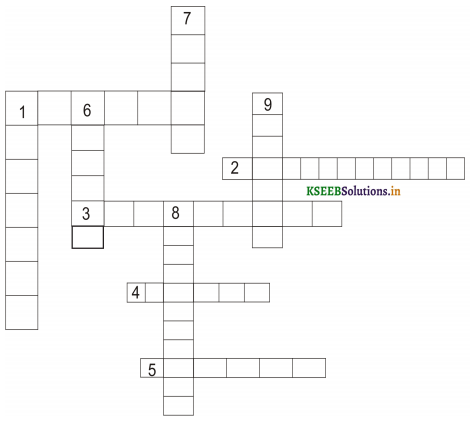 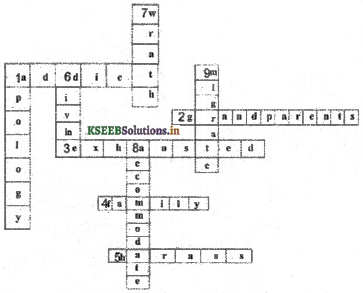 C2. Answer the following after you discuss the questions with your partner:

Question 1.
How different was the life style of Anjali from that of her grandparents?
Answer:
Anjali was leading a city’ life whole her grand parents were living in a little village.

Question 2.
Describe how Anjali behaved with her grandparents in the beginning.
Answer:
Anjali was in her fussy, irritating, brathy mood. She-made a show of hvvo she had lot her room. She would talk much sometimes and wil be glued to the T.V.

Question 3.
What changes were seen after the grandparents started living with them?
Answer:
Their routine changed and they need to adjust there was objection for eating onions and egg. The gland parent would not go with than to eat out at restawrdts or watch movies in theatres, they would not energy shopping strap dressed short skirts were considered foreign. Pop music was moval and icecream were not good for health.

Question 1.
Why did Anjali behave rudely with her grandparents?
Answer:
She was unhappy for giving up her room for her grand parents. She was an only climb. She never shared anything till new and she wanted to stick to that.

Question 2.
If you were in the place of Anjali, how would you have reacted?
Answer:
Student Activity.

Question 3.
Explain the reasons for the change in Anjali by the end of the story.
Answer:

G1. Look at the pictures of two rooms shown below. They belong to Shifu and Rayu:

Write 10 differences you can see in these two rooms. Use the words given in the box to write your sentences.

One is done for you.

in, on, under, near, inside, outside, between, at, above, below

The words given in the box show the position of an object. Such words are called ‘prepositions3. Some more prepositions are, ‘of, to from, against, with, during, for’.
Answer:

G2. Underline the prepositions in the following passage:

Anju had enjoyed having a room of her own in the past. She hadn’t shared her room with anyone else. But now her grandparents were expected to come from their village to stay with Anju and her parents. Anju’s father wanted his old parents to be near him so that he could take care of them. Her room was given to her grandparents to make them comfortable I during their stay. This was against her desire. But after some days, Anju began to enjoy the company of her loving grandparents in her house.

G3. Complete the following paragraph from Rayaan’s diary using suitable prepositions given in the box:

One is done for you. 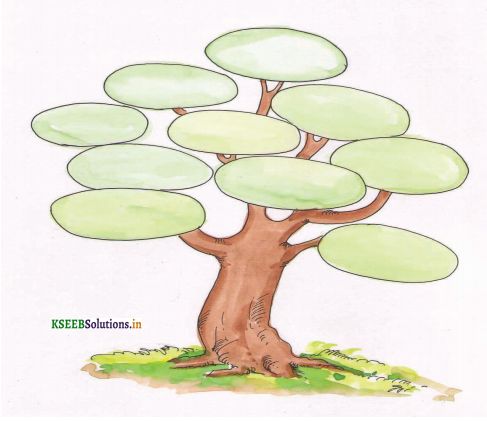 Once there lived Anjali, her parents in a city. Their family was a nuclear one. Her parents were both working. Her grandparents were in a small village taking care of their farm. Now he was old and found it difficult to take care and they wanted to move to Anjali’s house.

Anjali’s mother was keeping her things in another cupboard and told her she should sleep on the couch in the hall instead of her room. She was very unhappy as she never shared her things before.

Her grandparents came to stay with them. She showed her anger towards them in many ways. She sat in front of the TV for a long time. The Dadi was not approving of her wearing stage dresses or short skirts. She did not like pop music and eating ice cream also.

The grandparents did not go with them to 6at out at restaurants, watching movies in theatres or shopping. Slowly Anjali’s anger came down as Dadi stopped commenting on her clothes. Grand father helped her in math. He made her read newspaper. She escorted her to bus stop where her school bus came.

Daid started making nice delicious food. This gave Anjali’s mother some extra time to care for Anjaii’s needs. One day they told they wanted to to their daughter’s place for a while. Immediately Anjali asked them when they were leaving. Her parents scolded very much for asking that question.

After the grand parents left, the Havel was looking bigger as it used to be before. She felt their absence. When the phone rang the next night 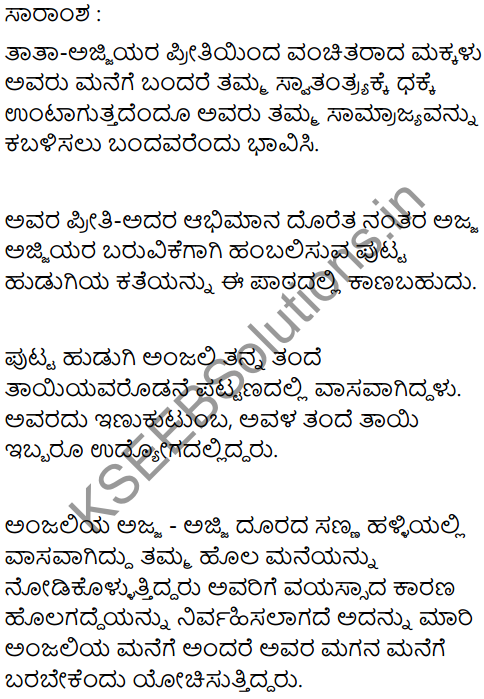 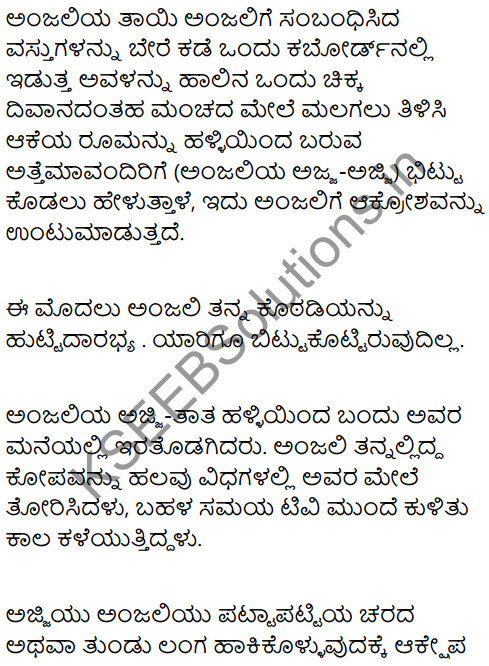 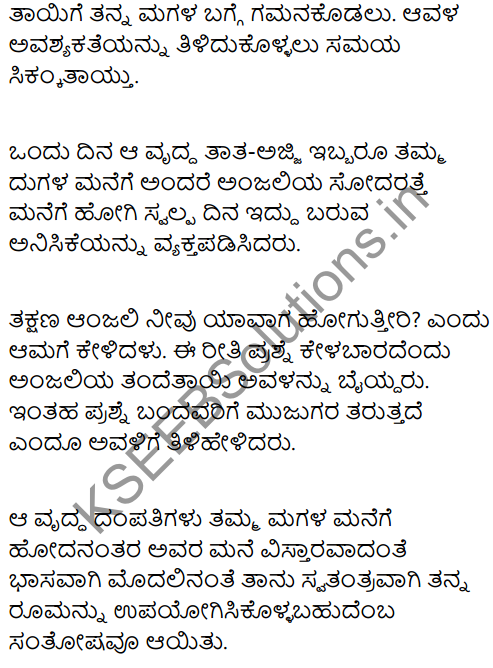 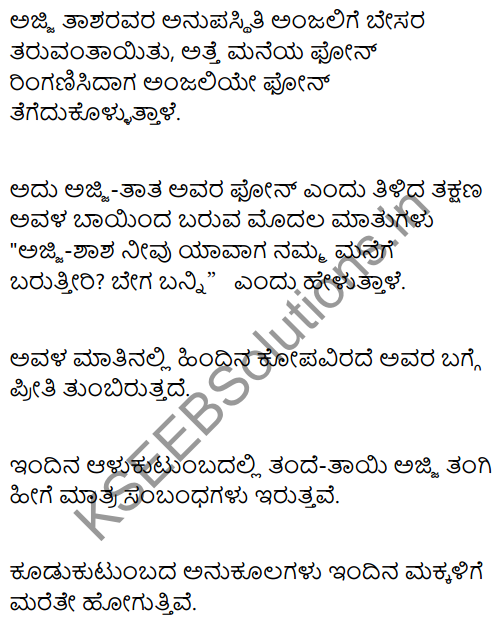