Students can Download English Lesson 1 A Tiger in the House Questions and Answers, Summary, Notes Pdf, Activity, KSEEB Solutions for Class 7 English helps you to revise the complete Karnataka State Board Syllabus and to clear all their doubts, score well in final exams.

A Tiger in the House Questions and Answers, Summary, Notes

Question 3.
Timothy was more friendly with Toto than with the puppy. (True / Not True)
Answer:
True

Question 5.
Timothy had an air of superiority about him. (True / Not True)
Answer:
True

Question 8.
What changes in Timothy made, Grandfather decide to transfer him to a zoo?
Answer:
When Timothy was about six months old, he grew steadily less friendly. Whenever he went out for a walk he would try to steal away to stalk a cat or someone pet Pekinese. Sometimes at night, they would hear frenzied crackling from the poultry house and in the morning there would be feathers flying all over the veranda. Finally, Timothy began to stalk Mahmoud about the house. All these changes in Timothy made grandfather transfer him to the zoo.

Question 9.
Why did Grandfather say to the tiger, “Good night Timothy”?
Answer:
When the grandfather came to know that the tiger in the cage is not his Timothy, He withdraws his hand from the cage and kept his face near the tiger and mumbled. ‘Good night, Timothy’.

Question 10.
Why did the tiger begin to lick grandfather’s hand with more and more relish?
Answer:
As the tiger was very dangerous which was caught two months ago it was licking with more relish as nobody went near him and it was thinking of delicious food.

Supply the missing words in the following sentences:

Fill in the blanks choosing the appropriate adverbs or adverb phrases given below:

A Preposition shows the relation of one word to some other word or words in a sentence.

Supply the missing prepositions in the dialogues given below:

1. Grandmother: Where is Timothy?
mother: He has gone out.
Grandmother: Gone out? Who with?
Bond: with Mahamoud.

2. Mahamoud: Grandfather was shouting at me.
Mother: What against?
Mahmoud: for not tying up Timothy.

3. Bond: Grandfather has brought home a tiger cub!
Grandmother: A tiger cub? Where in?
Bond: from the jungle.

4. Superintendent: Sir, Why are you standing before that cage?
Grandfather: I have been conversing my Timothy.
Superintendent: Really? from how long?

A Tiger in the House Summary in English 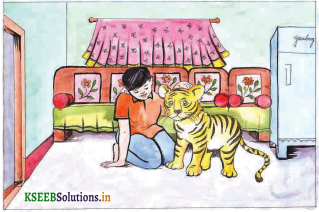 Timothy, the tiger cub was discovered by grandfather on a hunting expedition in the Terai jungle. Cub was named Timothy by the grandmother and it was fed milk in a feeding bottle by their cook Mahmoud.

Later he was put on a diet of raw mutton etc. Timothy had 2 companions Toto, the monkey, and a small mongrel puppy. Initially, it was afraid of the puppy, and later on, it became friends with him.

The grandson came to his grandparent’s house. Timothy started playing with him also. When it became a full-grown retriever, he was taken for walks. People would get scared of him and go to the side of the road. At home he will be reclining on the sofa majestically.
Timothy had clean habits. 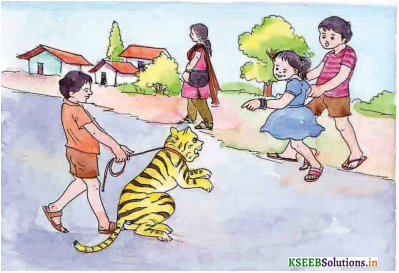 When he was 6 months old he became less friendly. He started stealing other animals for food and troubled the cook also. So Timothy was taken to a zoo in Lucknow and the zoo authorities were glad to receive a well-fed and fairly civilized tiger.

After 6 months grandfather went to zoo to see Timothy. When the grandfather approached the cage, he saw a full-grown tiger with a magnificent striped coat.

The tiger came near him and he stroked it. When the tiger was troubled by a leopard and it would slink back to his corner. Many people gathered to see the reunion of grandfather and tiger.

The keeper was surprised to see the friendly behaviour of the tiger towards grandfather. The grandfather told the keeper to put the tiger elsewhere as the leopard kept frightening it. 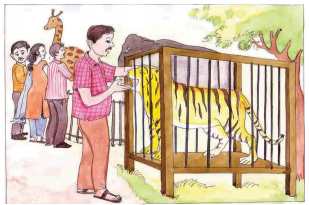 The grandfather before going back home saw the keeper who was there when he came to leave Timothy in the zoo. The grandfather went to him and asked whether he remembered him.

The keeper told that his tiger died 2 months ago of pneumonia. The grandfather went to the tiger and told goodbye if Timothy and walked briskly out of the zoo.

A Tiger in the House Summary in Kannada 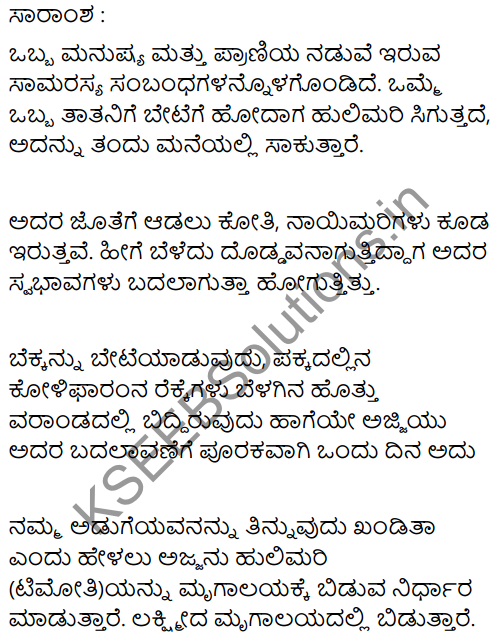 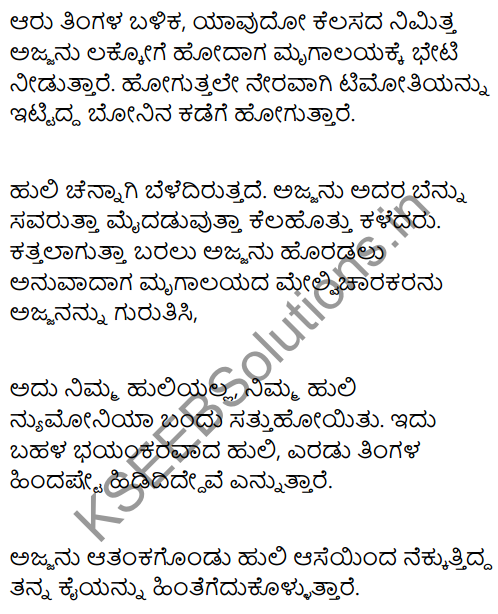