Students can Download English Poem 7 My People Questions and Answers, Summary, Notes Pdf, Activity, KSEEB Solutions for Class 6 English helps you to revise the complete Karnataka State Board Syllabus and to clear all their doubts, score well in final exams.

1. a) Write the names of the professions:

b) Do you know any other professions? Write them down and discuss the nature of work.

C1. Answer the following in two or three sentences:

Question 3.
Why do people sigh?
Answer:
After a day-long work, if they return home empty-handed, the people sigh

Question 4.
Who does the poet refer to as God-loving men?
Answer:
Men who pose themselves as Godmen. They preach that all men are equal, but never; try to uplift the poet’s people.

C2. Discuss in small groups and answer the following:

Question 2.
What, as mentioned in the poem, are the different activities done by them?
Answer:
Carrying stones for buildings, excavating gold. Plowing the field, sowing the seeds, cutting the crops, build shops and raise bungalows, make footwear.

Question 3.
Why does the poet have sympathy for his people?
What, as mentioned in the poem, are the different activities done by them?
Answer:
His people are all hard workers and thy work for the benefit of society. But they suffer from poverty, so he sympathizes with them.

Question 4.
Isn’t-it a pity that some people build the shops but get into heavy debts? How does this happen?
Answer:
Even though the poet’s people toil day and night, they are paid a pittance. Many of them can’t be offered even a square meal a day because of their meager earnings. They are forced to borrow money from their employer’s for huge interest rates. The employers deduct the loans from their payment and the poet’s people go home empty-handed or borrow again.

Question 5.
What do you think should be done to solve their miseries?
Answer:
The government should take the responsibility of maintaining the equal status of people in the country. The daily wage workers must be well paid and enjoy all the benefits from the government like the government employees.

My People by Siddalingayya About the Poet:

Siddalingayya (1954), Professor of Kannada in Bangalore University is a major poet in Kannada Literature. He pioneered the Dalit voice in 1975. ‘Dalit’ is a cultural term denoting the oppressed class which was treated as untouchable by the so-called upper castes. The administrative term used now for such a class in India is ‘Scheduled Caste’. The trendsetting work on Dalit Literature in Kannada is ‘Holemaadigana Haadu’ (1975), a collection of poems by Siddalingayya. He uses the native term ‘Holemaadiga’ to give the indigenous Dalit identity for this exploited class.

The influence of the poems of Siddalingayya paved the way for the Dalit movement in Karnataka. His autobiography ‘OoruKeri’ is translated into English and also many of his poems are translated to various Indian and other languages.

My People Summary in English 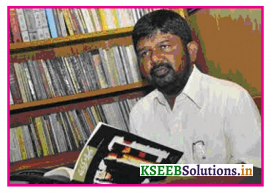 Siddalingayya, professor of Kannada in Bangalore University is a major poet in Kannada Literature. Dr. Sumathendra R. Nadig has translated the original poem of Siddalingayya in English.

In this poem, the poet presents before us the miseries of people and comes to the conclusion that the rich are getting richer and the poor are getting poorer. There is no end to the miseries of the people. They go only for hard work and are not in a position to enjoy the fruits of hard work.

The people carry stones for building sites till they faint. They don’t get enough food. So they starve. The people dig a lot and excavate gold but they are short of food. Some people weave cloth and make silk sarees but they don’t wear them. So they go naked. The farmer works from dawn to dusk. They can’t enjoy it because of their poverty.

So they come home empty-handed and heave a sigh of relief because they don’t know what is rest. They face many problems and live in misery. It is these ordinary people who can build shops and raise bungalows but they can’t stay in it. They work and take their money but at last, they get into heavy debts.

These hard-working people work round the clock. Sometimes they collapse on the street but they are not after somebody’s help. They never cry for help but don’t disclose it. They hide their suffering and go to work the next day as usual.

We hear fiery speeches about these people but they become ash. They prepare footwear for god loving men who are happy. They do not have the strength to face. So they fall at other’s feet but they are not helped but discarded and neglected but the people who work are very much devoted. They carry the commands of others like the verdict of God but don’t expect anything in return. They live on-air and face the world. Like this, the poet expresses the miseries of hard-working people in the poem.

My People Summary in Kannada 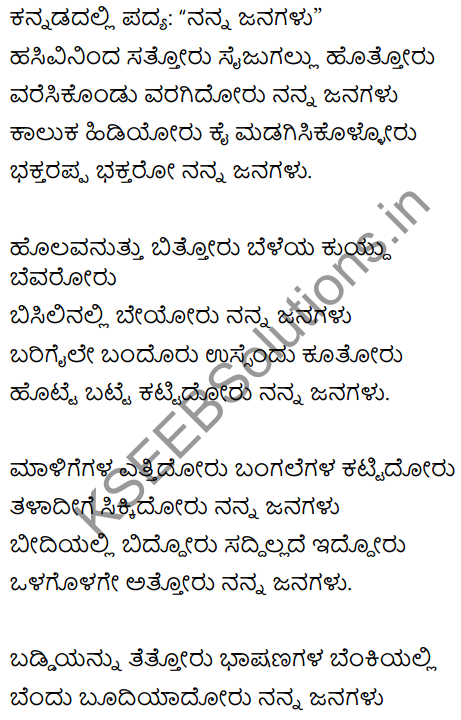 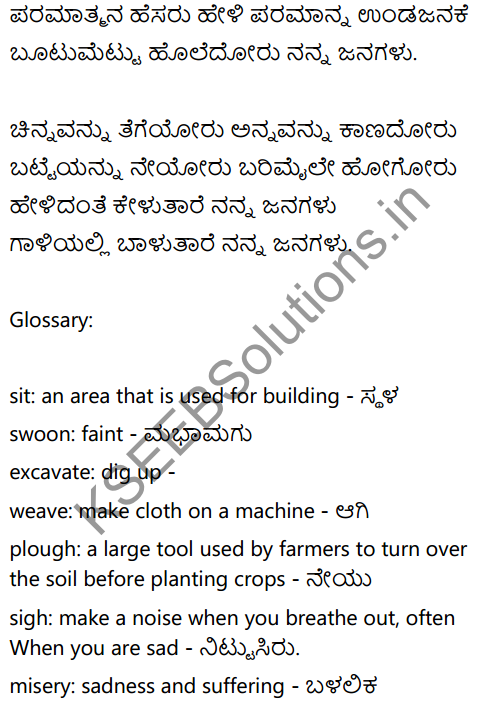 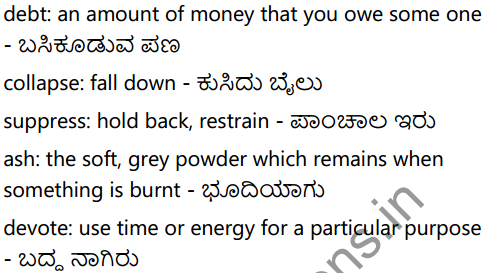